The True Nature of Colombia

Without a doubt, Colombia is captivatingly beautiful. While riding its steep ridges and valleys, draped in a carpet of a million greens punctuated by neon-bright fruit blossoms and entire hillsides of orchids, you wouldn’t be surprised if a brontosaurus lumbered by in this fairytale Jurassic Park.

But is it any more stunning than riding the spectacularly rugged coast of South Africa, or the postcard valleys of Switzerland?  Ultimately, beauty really is in the eye of the beholder, but never, in any of my two-wheeled adventures, have I met people with such genuine hospitality, warmth, and passion for cycling as in Colombia.

The irony is that the country’s history, dramatized most recently in Netflix’s ‘Narcos’ cultivates visions of violence, crime, and poverty, but in reality, over the last 20+ years, Colombia has been quietly marching forward, out of Escobar’s shadow, and into becoming a full-fledged travel destination.  Aside from becoming the hot new ‘must ride’ destination for cyclists, Colombia’s burgeoning tourism industry is drawing foreigners to its beaches, coffee, and flower regions.   These tourists, whether on bike, or under Tilley hat, are welcomed with broad smiles and open arms by all, from hotel owners to roadside juice vendors, and this is exactly why you must come.

Last week we took nine amazing clients to Colombia for our third annual tour, and what happened on the very first ride beautifully demonstrated the true nature of  Colombian people:

Our first ride coincided with the final stage of the Tour de Colombia, (a pro tour race that attracts the likes of Tour de France champion Chris Froome), so as a special treat for our clients, we arranged for our group to participate in the Reto – a granfondo held on the closed race course in advance of the pros, who started a couple of hours behind us.  Needless to say, riding on closed roads through a city of 4 million people was pretty amazing, but what I experienced on the final climb of the race was more special than any road could offer.  One of our clients ended up struggling with both the fast pace and effect of riding at over 1700m altitude, and the prospect of completing the grueling 17km climb to the finish at 2600m was looking less and less likely.  Wanting to see everyone succeed on the first day of our tour, I decided to ride with the client and assist on the steeper sections of the climb. I’d never pushed someone on such a long, difficult climb though, and the higher we rode, the thinner the air became, the steeper the road climbed, and the more the elastic was being stretched.  About halfway up, I began doubting whether we’d be able to finish, and then the Magic happened.  Little did I know that close to 100,000 Colombians were making their way to the climb.  Walking up side streets, setting up lawn chairs, bbq’s, and beer coolers in anticipation of watching their heroes race up the final climb in a couple of hours.  The higher we climbed, the greater the crowds grew, and as we struggled, our faces etched in pain, these beautiful people would begin cheering, first with whistles and shouts of encouragement, then building to a roar, urging us on with cheers and screams I thought were reserved only for the pros.  Young men would jump the concrete median, run out and offer to push, giving me a much needed break, if only for 20 metres, and then with a pat on the back, they’d disappear into the crowd.  Willed on by this outpouring of encouragement, we managed to crawl up to the final 1km of the climb, where throngs of spectators were held back by fencing lined with brightly coloured metal advertising panels. Their pounding on the panels was deafening as we approached, and although the last corner was the steepest section of the climb, I pulled back and let the client ride alone to the finish, propelled by the power and energy of the Colombian people.

There is a commonly held belief that happiness is inversely proportional to wealth, and Colombians lend substantial proof to this precept.  Simply put, it’s a country of simple, friendly folk who find joy in all that they do.  Colombia has not yet fallen victim to the evils of becoming a ‘destination.’  The hustlers, the junk shops, the two-for-one happy hour drinks served by feckless waiters trying to screw you on the bill.  Nope, just honest, hard working people who are happy to have you, and proud to show you their country.  Will it last?  Who knows, but in a world where it’s increasingly difficult to travel to ‘unspoiled’ places, Colombia is a rare gem. 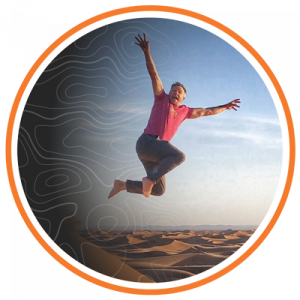 The higher we climbed, the greater the crowds grew, and as we struggled, our faces etched in pain, these beautiful people would begin cheering, first with whistles and shouts of encouragement, then building to a roar, urging us on with cheers and screams I thought were reserved only for the pros.

Make sure to check out all the photos from Colombia on our Instagram and Facebook pages! If you have any questions or would like to know more about cycling in Colombia please feel free to send us an e-mail or give us a call!

Sub-tropical riding at its best